My view this morning…

Winter Advisory until Sat. at 7 a.m. They said…

No accumulation on roads they said….

I responded to myself with, “Huh, that’s usually what they say before us have some unprecedented and unexpected snowfall. Now in context, it rarely snow in early December in Georgia. If it does it doesn’t accumulate, it doesn’t typically last and  it is extremely rare! (At least south of the North Georgia mountains.)

The snow begins, I watch it from these very windows the entire day as I go about my daily chores and my to-do list. At first small and light, later larger flakes; some the size of a quarter. It didn’t take long to see we had hit the 1/2 inch mark. Then the one-inch mark. By noon, it looked like  the picture below.

Isn’t it beautiful; how amazing is our Creator! And man thinks he can predict this awesome God and what He has set in motion. Ah, but this story is just beginning! 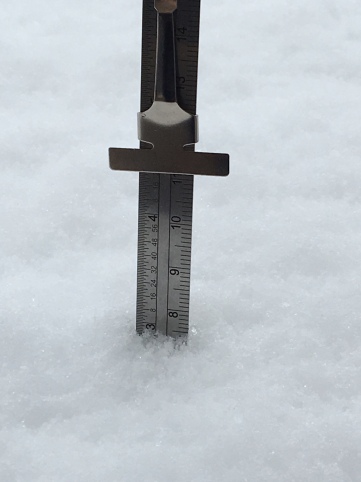 This verse comes to mind – “Where is the way where light dwells? And as for darkness, where is its place, That you may take it to its territory And that you may know the paths to its house? “You [must] know, since you were born then, And because you are so extremely old! “Have you entered the storehouses of the snow, Or have you seen the storehouses of the hail,”
‭‭JOB‬ ‭38:19-22‬ ‭AMP‬‬

For a moment, I sit relishing in this autumn wonderland, traveling through my memory of past Decembers; maybe there was another time in early childhood we had a similar experience. But I have lived within a forty-five-mile radius of my birthplace my entire life and can remember nothing that compares to what is unfolding before my eyes. I feel pure joy bubble up inside at the rare beauty. Yes, there are cares and concerns, but for the moment they are muted; put on hold. They are diminished by this extraordinary sight. And the snow keeps coming…

Around 6:30, I begin preparing some corn muffins to accompany our soup. The power flickers a number of times as they cook in the convection oven. Resetting it each time, they finished before we lost power around 7-ish, thankfully. Also, I am grateful that I asked my sweet husband to light the pilot for the gas logs earlier and turn them on just in case. It has an electric switch but if it’s on it will stay on without the power.

It is amazing how peaceful it is with no power, no tv, no internet. A quiet night before the fire, conversation, rest, a little reading. Nineteen and a half hours of peace and quiet and semi-disconnection. Yes, we checked email and social media a little until the phones drained. Mostly, we just enjoyed the downtime, not once worried about the power or lack of heat. We only ate what we could fix on the gas stove top, manually over-riding the pilotless ignition and bundled up.  Saturday we awoke to a real wonderland! 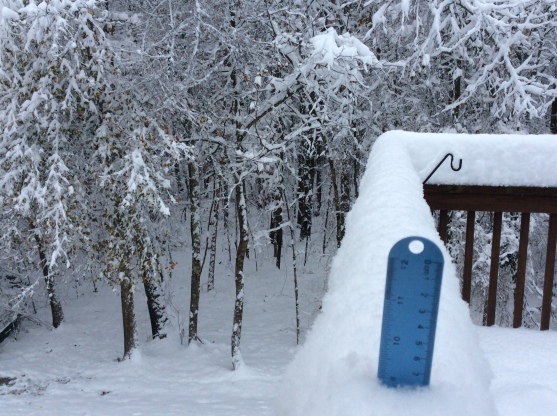 A friend said the record was a little over 8 inches back in 1940. Haven’t checked to see for myself. We also have a sundial out front. The needle that creates the shadow was completely covered, and the top looked like an enormous wedding cake. Snow there measured 9.9 inches.

Still, no power, not  a problem though. The freezer is frozen and fine. The gallon of ice I placed in the frig. is starting to melt and the temperature is going up a bit. It’s time to fill ice chests with snow and transfer food outdoors where it will keep. We even stuck the bottle of soda directly into the snow on the back deck. I am so thankful for lessons learned as a young child during an ice storm. We were just over a week without power, and I learned many survival techniques. I am also grateful for having a gas stove (at least we can cook on top overriding the pilotless ignition, gas logs since we don’t have a wood burning fireplace), a kerosene heater in the basement just in case we need it, and assorted flashlights, candles and oil lamps.  I honestly don’t know how people with all-electric manage in outages.

Some may be asking, “what’s the big deal? It’s just a little snow.” You know what, you are so right; especially if you are from up north where snowfall is much higher. Nine to ten inches is nothing when you are from a place where two and three feet of snow is the norm. Yet for my husband and I, this was epic! When you live in an area that you may go a few years without seeing even a dusting of snow or at best a dusting to three inches when you do have some; this is amazing!

My favorite part has been the peacefulness; the serenity. I love how everything slowed down. Neighbors that rarely see each other are all out walking around and chatting. Watching the toddler girl next-door play in the snow with abandon, throwing herself down making snow angels over and over on every smooth untouched area of snow. Then getting back up throwing a snowball followed by grabbing a handful to eat. Our dog Shelby (just a year old) playing in the snow for the first time and loving it, nipping at it and eating it. Wishing I could have been with the grandkids as they played in it at their homes and watching them enjoy it.

I love God’s sovereign timing, too! It has been perfect. It came right at the busiest time of year for many of us, when we are running around like crazy to appointments, parties, and all sorts of gatherings; when we are frantically looking the right gift for loved ones; and so many busy tying up their year in a nice little bow. A perfect pause. Most will either love it or hate it. For me, it brought peace. It brought much joy. I didn’t see inconvenience. I saw opportunity. Opportunity to slow down, ponder the season, be grateful and see unexpected blessings over the perceived difficulties. It was time to relish in the simple things and the small things that we take for granted most of the time. It was a reminder that we can choose to pause on our own without a prompting from the weather and it is good for us to do it.

From our home to your: Merry Christmas and A Happy New Year!

May Grace and Peace be yours!!

Follow Living in His Grace on WordPress.com
Join 123 other followers