This is indeed an unusual year as we entered the Holy Week with Palm Sunday being just behind us. Passover began yesterday evening at sundown. We also had the first of four blood moons that will occur over the next eighteen months.  (Lunar Tetrads) Interestingly, these four blood moons will coincide with the Jewish feasts of Passover and Sukkot this year and again next year.  There have only been a hand full of times through history that these have occurred on Jewish Festivals since the time of Christ. Each time it seems, significant events were witnessed in the lives of the Jewish people.

Last nights blood moon began around 2:30 in our time zone.  It was supposed to be able to be best seen in the Western Hemisphere and especially well seen in the United States.   I was looking forward to setting my alarm and watching from 2:30 a.m. until 4:30 when it was going to be at the height of the eclipse. There was only one problem…it had rained all day and no sign of clearing. I checked the radar a final time. Rain covered the whole area of north central Georgia and extended almost to Mississippi. Not a break in the action to be seen. Oh well, Lord you know the desire of my heart. I am going to turn off my alarm. If things clear up, You are more than able to awaken me to see it, after all You have done this many times to have me pray about situations and for people…

About 2:25 a.m., I found myself awake. Could it be? I. Quietly walked to the picture window in our bathroom and looked out. The sky was much brighter than when I went to sleep but still too dark for a full moon. Then I moved to a smaller window and looked up.  I caught a glimpse through a break in the clouds of the pre-eclipse moon so I decided to get comfortable in the sun room and watch a while. Cloud cover returned; steady rain followed as I sat quietly waiting. The thought came to me, you should check online.  Think me nuts if you will, but I believe it was God’s prompting that awakened and the wisdom of the Holy Spirit whispering check online.  Some think it is crazy, I call it Faith. Not once had I considered someone would have it live online. I certainly expected to see pictures in the days to come but not live.  So I got my iPad and googled 2014 blood moon and there it was…a live broadcast from an observatory in Arizona! It was a beautiful thing to watch. The silvery white brightness began to be covered with a pinkish glow. It then turned into a peachy color gradually darkening to a darker burgundy color. It was beautiful!

This is a screen shot of the live broadcast. It was actually brighter and more vivid on the live stream but this is a good representation of how it looked in full eclipse as the earth blocked the sun and the rays of light bending around the earth reflected back to us after reaching the moon. 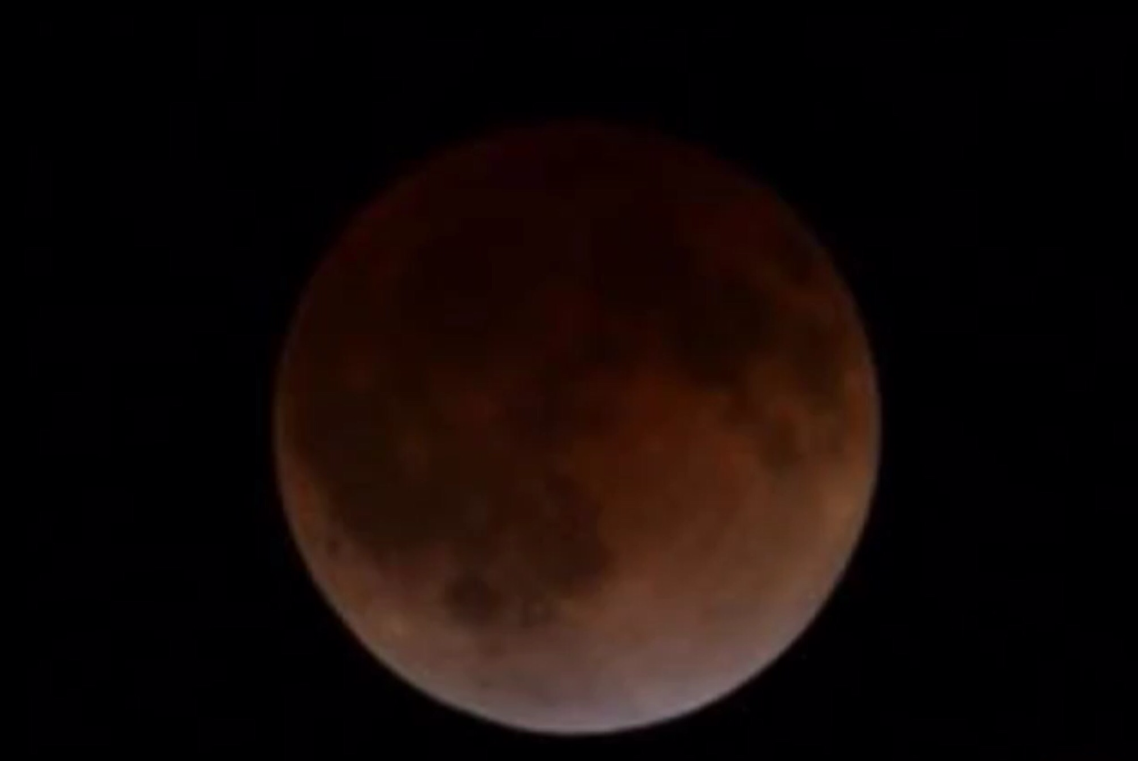 Though I am not wishing my life away, I am looking forward to watching again on October 8 and again next year in April and October. Hopefully we can see it in person if it is still visible here and weather is permitting. My understanding is the last moon of the tetrad will be visible over Jerusalem next October. Either way, it is great to know observatories around the world will likely be broadcasting these occurrences in the heavens.

Each time at tetrad has occurred, significant events have occurred among the Jewish people. The most recent was in 1967 and 1968 coinciding with the Six Day War. One result was Jerusalem becoming the undivided Capitol of Israel. Prior to that was 1949-1950 which followed on the footsteps of Israel becoming a nation. Jewish people from around the world began to be gathered to their homeland and that in-gathering continues even today. Another example was the event prior to and following the blood moons of 1493-1494. We all know that Columbus sailed and discovered America in 1492. During this group of blood moons, an Edict of Expulsion was instituted against the Jews of Spain and the Spanish Inquisition. The Jewish population had a choice between converting to Catholicism, torture, or leaving. Because of Columbus’ discovery, many found safe haven here in America. Will the blood moons have great significance as all the previous ones? Only time will tell but in the past they have all been significant times on the Hebrew calendar.

For more information there are a number of good books and online resources available both from faith perspectives and scientific perspectives.

Joel 2:28-32 “After this I will pour out My Spirit on all humanity; then your sons and your daughters will prophesy, your old men will have dreams, and your young men will see visions. I will even pour out My Spirit on the male and female slaves in those days. I will display wonders in the heavens and on the earth: blood, fire, and columns of smoke. The sun will be turned to darkness and the moon to blood before the great and awe-inspiring Day of the Lord comes. Then everyone who calls on the name of Yahweh will be saved, for there will be an escape for those on Mount Zion and in Jerusalem, as the Lord promised, among the survivors the Lord calls.” (HSCB)